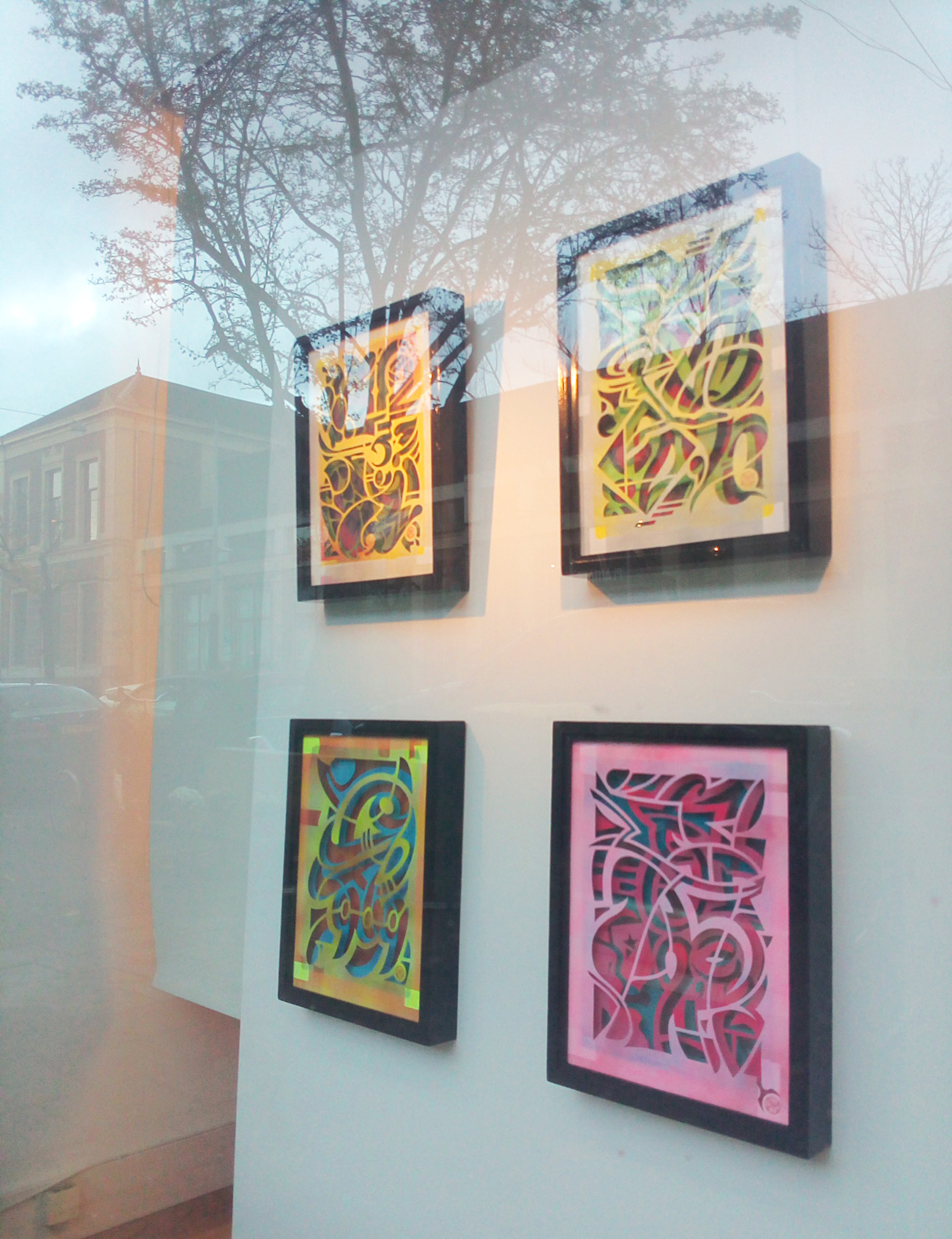 Showing work at the Plantage Etalage

In the month of november 2020 I am showing four works from my Valutagrafie Series at Kjeld de Ruyter’s Plantage Etalage in the centre of Amsterdam, across from Artis Zoo. Make sure to take a look if you are in the neighbourhood this month!

This one was designed before V 008 (check) but cut and painted after. Further adventures in using existing iconography and pictorial elements.

I cut the third layer for a second time, dark colours didn’t work that good with the second layer. Chose for blue instead; acrylic with a fine coat of white spray paint.

Further experiments combining spray paint and acrylics. For example, for the top layer I spray painted a blue rectangle. Pink acrylics over that, and light use of red spraypaint to finish it off.

I feel like I’m close to the edge here regarding complexity. After this one I might do a few steps back.

Once again I incorporated some existing shapes in this one. Parts of a logo of a Dutch warehouse chain that doesn’t exist anymore form the basis of a 2, some characters from the logo of a photography brand combine to form a 3. There’s a revolver in there too.

Quite a few layers of paint here: 4 coats of acrylic and 13 coats of spray paint.

This one felt like a breakthrough on a couple of fronts. It’s the second one where I added figurative elements but the first one I was satisfied with. There’s a Mondriaan painting and also a prehistoric cave drawing I interpolated. The $ sign is based on the Superman logo.

The trickiest thing is to get the three (or four, really) layers to interact with another in a satisfying manner.

This is also the first work where I added extra color after cutting the layers. I added spray paint to the front and middle layers. When I spray paint I often tape the paper to a cardboard rectangle. Here I decided not to hide the tape but to use it as an extra element in the composition. I particularly like the spots where the tape is removed and the little yellow rectangles appear.

After making this one I had the simple realisation that you can bring almost everything back to shapes. So integrating elements from all different times and cultures felt natural to me.

With this one the ideas came quickly. This is the first work where I succesfully added an extra layer in the background. I experimented with using stencils and spray paint. The best effect was achieved by cutting out part of the back layer. The fuzzy edges of the stencil didn’t quite work with the stark lines of the cut out layers.

I added cents to the amount on the painting, to give it some extra detail. The 44 may look like a font but I designed it myself.

This is also the first time I added extra color to the front layer, yellow in this case. It took some time to get the different colours in a right balance but I think I found a way.

If you have this piece of glass, and your idea is, let me put this away while I work on something else for a minute, don’t, I repeat don’t put it on your swivel chair. You will forget it and hear a strange sound coming from behind your back whenever you decide to sit down. If you have excellent reflexes, like me, the damage is manageable. But if you don’t, you might end up having to call a doctor with a flesh wound caused by sitting on a piece of glass you put in your chair yourself. Beware!

What you see here is the second version of this design. The first one was made on inferior paper. I took up the chance to update the design slightly too.

I worked on this between two more intricate designs. It was interesting to work on something more straightforward. I intend to dial the complexity back again after finishing my upcoming works.

Not every design makes it to the finish line.

Still, I found out some things working on this one that I could use later on.

An idea here was to repeat the inner shapes of the 8 and the three. Visually, a little sub par. Also, the layers don’t interact with another in a satisfying manner.

This work is the first one of the Valutagrafie Series that I was truly satisfied with. Also one I got back to after a while, looking carefully why this one works better than some of my designs that followed it.

It is based on an earlier version I made at 21 x 29,7 cm size. Pretty soon I decided the work had to be a little bigger than that, leaving more room for details and giving it a less ‘boxed-in’ feel.

I will collect here some of the work I made that lead up to the Valutagrafie project.

my thanks go out to

Wim Wepster, for building the site

Bert Nielsen, for building the frames of the artworks and priceless technical knowledge and feedback

Machiel Botman, for planting a seed 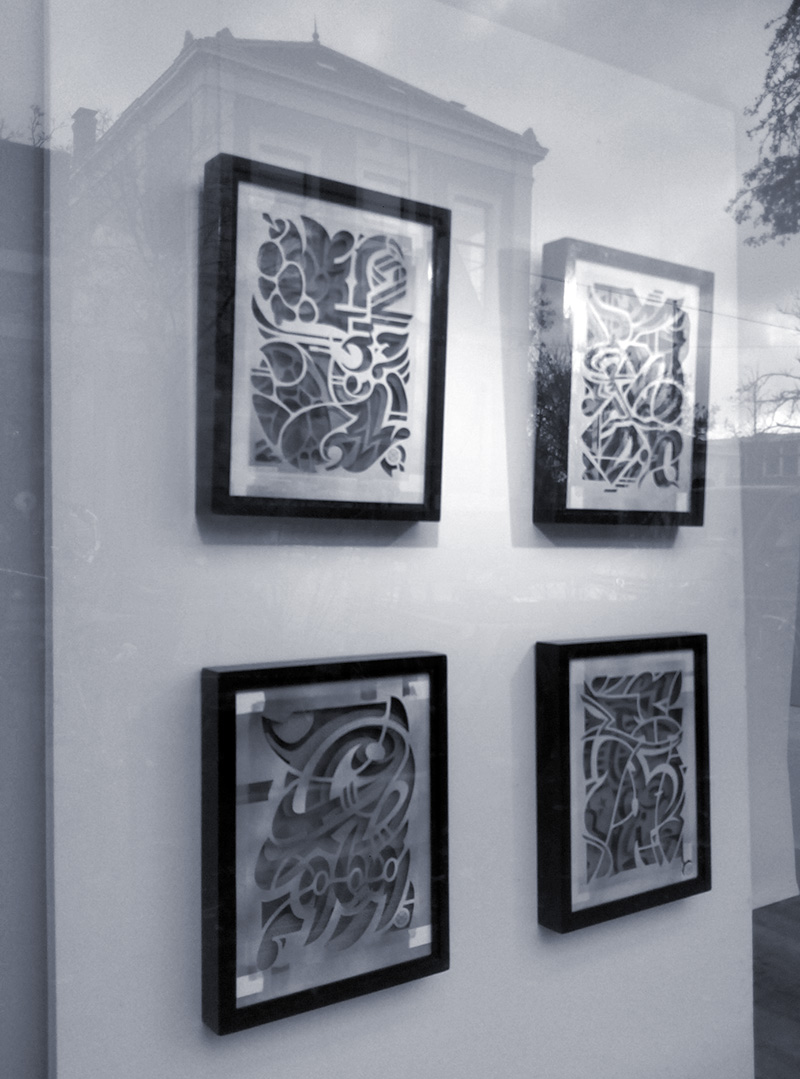 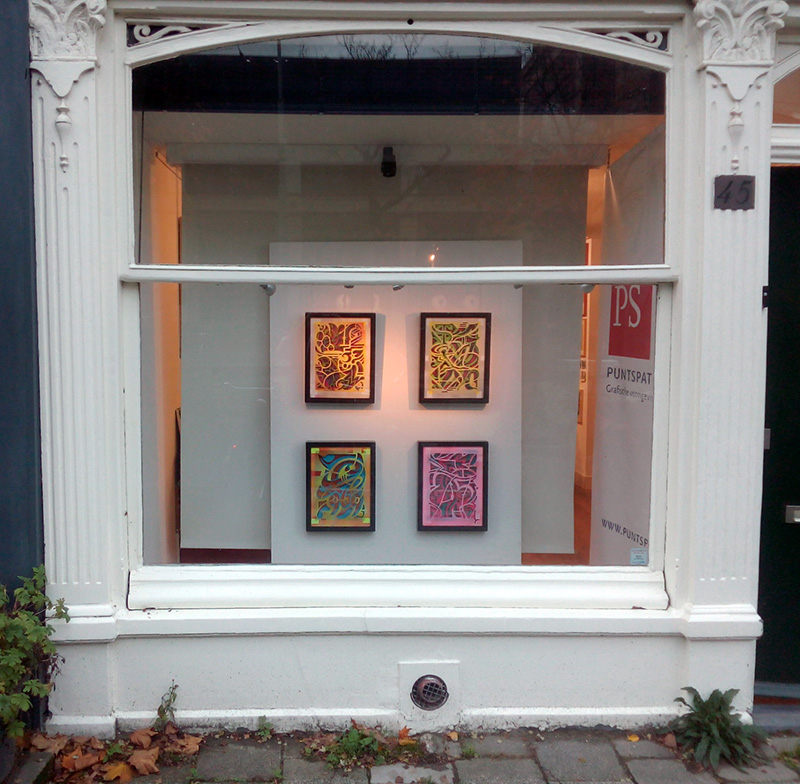 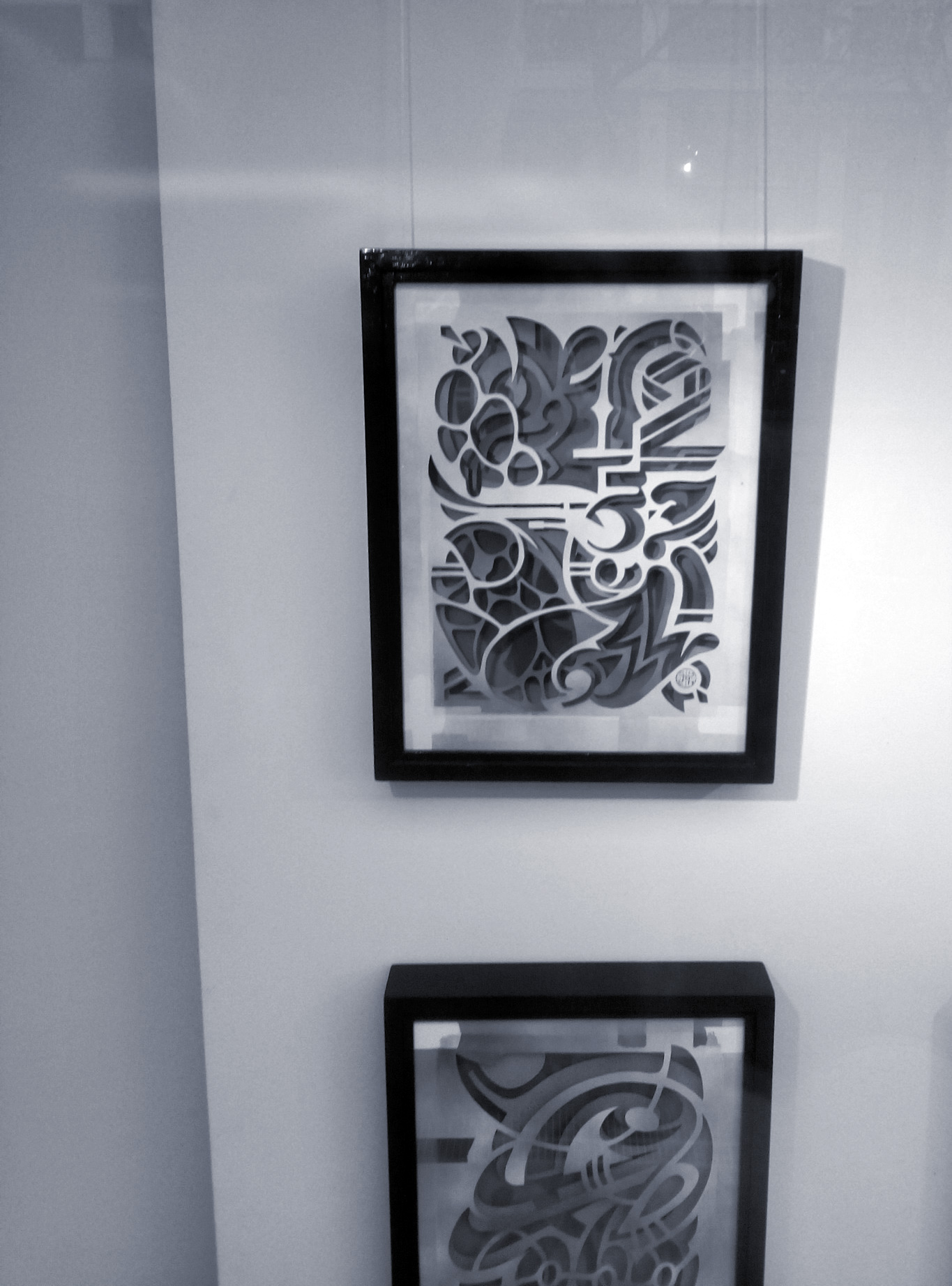